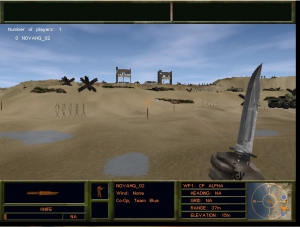 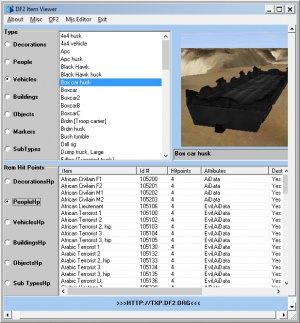 This tool was created to ease the minds of new map makers and old for that matter on what some of the items look like before placing them into the med. The pictures in the tool were donated by §harpe from MMH, De Buurman and myself DR.EVIL~TAG. All pictures are based off the updated Df2medv43a. Varg for his sound description list. Q-Dad~TAG for his help and ideas Thank you for your support.

DF1 to JO Z-Value Listing Tool for
By DR.EVIL~TAG 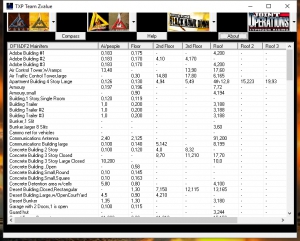 Its the most up to date Z values going supporting DF1 - JO , comes with a compass as well for placing items, fully editable, comes with an installer and uninstaller, web support and pretty much what ever else you need, supports 800X600 and up screens. 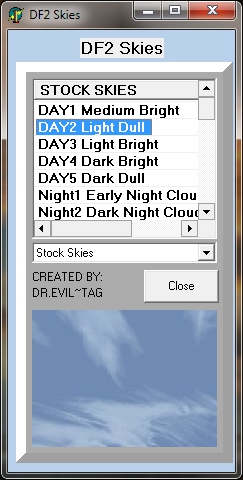 Allows you to view sky photos from DF2. 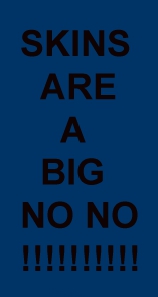 This was made to get rid of any player skins you may have had in your pff files and place the originals back.

Open the 3di file, See the textures , export textures out of the pff with out haveing to use a Hex editor to see what texture go with the 3di file. 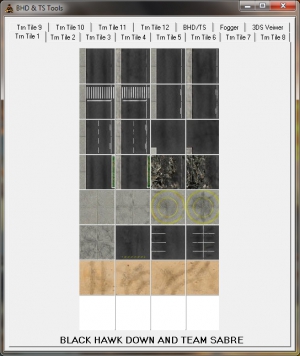 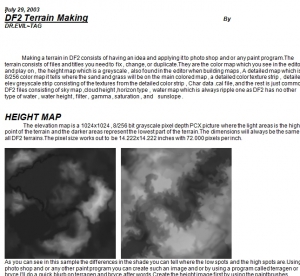 Making a terrain in DF2 consists of having an idea and applying it to photo shop and or any paint program.The terrain consists of files and titles you need to fix , change, or duplicate.They are the color map which you see in the editor and play on , the height map which is a greyscale , also found in the editor when building maps , A detailed map which is a 8/256 color map it tells where the sand and grass will be on the main colored map , a detailed color texture strip , detailed elev greyscale strip consisting of the textures from the detailed color strip , Char data .cal file, and the rest is just common DF2 files consisting of sky map ,cloud height ,horizon type , water map which is always ripple one as DF2 has no other type of water , water height , filter , gamma , saturation , and sunslope . 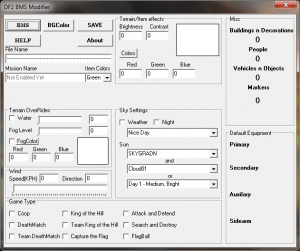 This new tool will allow you to add new effects to you existing BMS files you make. You can change the terrain color,Item colors create over 241 new skies. There is no need for file transfers between computers. Make you map in the med, do the changes using this tool and host your map. All can join with no problems and see all the effects you have just created. You can also add water/fog/wind/camo and other settings to existing maps that you may have downloaded and though it would be cool to have water or what have you but didn't want to go through the nausia of converting it to a mis file and then back to bms file.

Things you can do with it are as follows :

Theres a bit more misc info on it as well. Everything possible in this tool is compatible with CB and any changes to the bms such as the terrain color and or new skies are all compatible with all players , Meaning they do not need any extra files to play on your modded BMS files 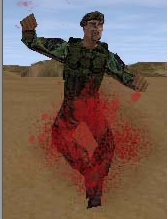 Which adds that extra 'splatter and gore" that we all love to the game. 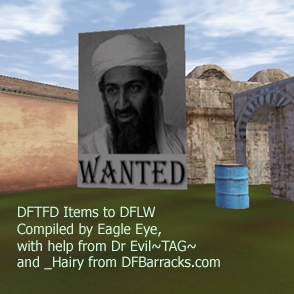 This Mod requires DV's DF2 Items for DFLW to be installed BEFORE you install the TFD items for DFLW.

BACKUP your Dflw.pff file before installing this mod.
We take no responsabliilty for any screwup...

This collection of DFTFD items collated, created and transfered by.... Eagle Eye, DR.EVIL~TAG, and Hairy.

Also transferred are the Waypoint names, Some Win and Lose Conditions and People names, along with a few custom ones as well.

Thanks to Iceman for and beta testing..

Thanks to DFArena for the Loader..

This mod not possible without the Bin Tools created by Devilsclaw, the DeSCR tool, created by DV, FwO-Raven for his PFF extractor and 3DI viewer/extractor. Many thanks guys for your tireless efforts in creating these fine tools for the DF community.

Changes the default pistol to a Glock Graphic 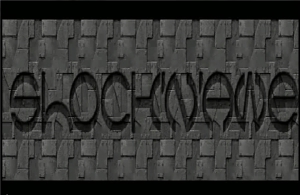 -Added over 350 items from the Deep Jungle Mod.

-Added the entire alphabet and numbers plus symbols so that squads dont have to use barrels or other objects to write out their squad tag in the maps they build.

- Added items in to Honor the memory of Dr. Evil Tags who was killed in Action.

- Added all the Items for TeamSabre so that all maps with any items from TeamSabre in them can be hosted on a BHD based server and People who dont have TeamSabre can still join the server. (Note: These items were added with the permission of NovaLogic and you will still need TeamSabre installed if you wish to use the Terrorist Characters).

- Included a customer Join Screen that will soon list the servers that are hosting the mod on a dedicated 24/7 server. This will allow players to Click on the server name and go straight into the server. (if you dont like the Custon Login Screen, you can get the original in the download section of bhdmods.com).

- removed the G36 and replaced it with the RPD and the USAS12 Auto Shotgun.

- Took out the G3 and replaced it with two seperate versions of the g3
a G3 Sniper for Snipers only and a G3 Auto that is for Medics, Gunners and CQB.

- Adjusted the AT4 so it now so that the player can carry two rounds instead of one.

- fixed a few items and issues from the original version.

- Fixed the Installer so that it Doesnt add /Shocknawe when installing to a folder other than the default path fr BHD.

(We have released this version in the Memory of Dr Evil Tags).
He was a dear friend to many of us in the BHD Community and will be missed by many. 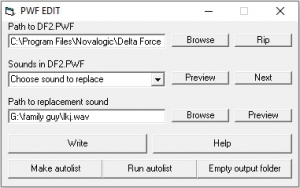 Edit PWF audio files for NovaLogic games with this tool.

Create PWF audio files for NovaLogic games with this tool. 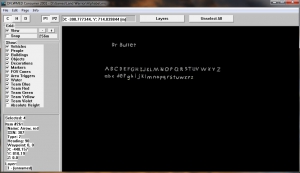 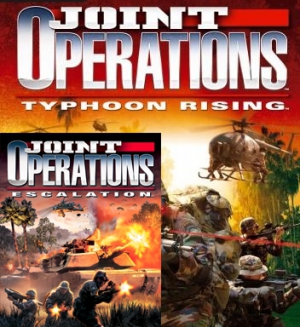 You should install the 1.6.9.2 patch before installing this patch. http://novahq.net/files.php?ID=316

the Replace the JointOps.exe in your game folder with the one from the zip file. 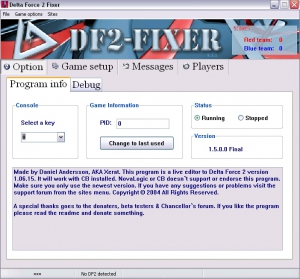 Live host
Edit the all the working settings without need to restart the server. The effect will first take affect in the next map so the features can`t be abused.

New settings
The start delay and end (the time for showing scores) is in seconds.

Team generator
Will generate a new team to the next map by random/score/side or by people using a special tag in their name. (the teams will hopefully be the same size for next map)

Messages
Write messaegs to the game, public/red/blue or admin messages. The Admin messages is bold white text that will be visible in the right column (the kill list).

Fast copy game information
Will cope the general information such as name, NK, password and place it in the clippboard.

Fast change
Will change the map without viewing the scores