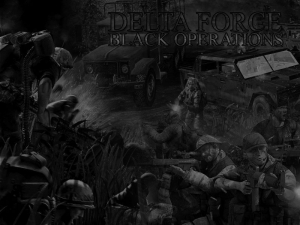 The world has been ravaged by terrorists. America has been attacked with biological weapons and has retreated from Iraq. London has been leveled with a nuclear suitcase bomb and again Britian feels alone.
France has fallen to Al Qaeda's new army that sprang from Iraq and is attacking the free counties of the world through unrestricted warfare and sheer terror.

The President of the United States has called on the last of the special forces to wage war through what we call....

Wage war with 19 new weapons not before seen in Black Hawk down Team Sabre.
Play on totally newly designed Multiplayer maps or make your own with the new mission editor that has 91 new objects to choose from
Over 11 new maps
Fight in snow ,desert, or new jungle settings with much new jungle foilage
Over 8 new Terrians...some taken from Land Warrior
Climbable trees
Make yourself blend in with the 7 new player skins
Play a gunner and now be able to site your weapon with the new iron sites for all of the gunner weapons
Be a CIA op or Special Forces op
Cringe as the 114 new sounds make you feel like your really on the battlefield
The time is now for Black Operations!